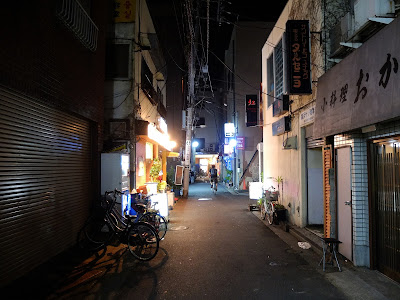 The best way to explore a city is by bike, and perhaps the best time for riding around a city is late at night.

While some places, like shopping centers etc have closed, it seems like a whole big part of the city opens up.  When I first, came to Japan I remember thinking how different everything looks at night - to the point where I would often get lost among streets that would have looked familiar in daylight.

It would be very difficult to not come upon something new and interesting while out on a slow bike cruise through the old backstreets and alleyways of Yokohama.

Yesterday, I had the pleasure of spending a bit of time with Bikes vs Cars director Fredrik Gertten.

Over a cup of coffee at Uplink Factory, he told me about why he decided to make the film and how bike advocacy groups in cities around the world are helping to bring about a "paradigm shift" away from car-centric city planning.  I also learned about some, maybe not so surprising, challenges he has faced in getting the film shown and distributed in Japan. For example, one very large and well-known media company here, who has bought his films in the past, turned "Bikes vs Cars" down with a simple "..but bikes are bad too."  Huh?

Anyway, it quickly became obvious to me that Director Gertten is incredibly passionate in his belief that the bicycle can be a great tool for bringing about positive change in our cities.

And he is a man who practices what he preaches!  Since he arrived on Tuesday, he has been making the most of the bike Dahon Bikes very generously offered him to use during his stay.  Here is a shot of him managing his very hectic PR schedule, with the assistance of a Dahon folding bike and the Tokyo subway system - two good things that go great together!
The Japan premiere of his award winning film "Bikes vs Cars" is this Sunday at Uplink Factory in Shibuya. 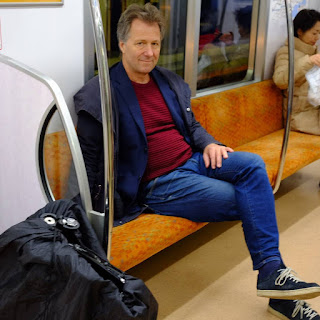 Tickets can be purchased for both the 4PM and 6:45PM screenings through Peatix online at http://www.uplink.co.jp/event/2016/42344.

Buy early, buy often!
Posted by Unknown at 6:51 AM 3 comments

Announcing the Japan Premiere of "Bikes vs Cars"

With all the power vested in me, as a proud member of the seemingly illustrious Cycling Embassy of Japan, I am incredibly delighted to announce our success in (finally) securing a Tokyo screening date for the Japanese premiere of director Fredrik Gertten`s documentary film "Bikes vs Cars".

From the press kit -

SYNOPSIS: Bikes vs Cars depicts a global crisis that we all deep down know we need to talk about: climate, earth's resources, cities where the entire surface is consumed by the car. An ever-growing, dirty, noisy traffic chaos. The bike is a great tool for change, but the powerful interests who gain from the private car invest billions each year on lobbying and advertising to protect their business. In the film we meet activists and thinkers who are fighting for better cities, who refuse to stop riding despite the increasing number killed in traffic.


There will be two screenings, first, the premiere at 16:00, then again at 18:45 on Sunday, January 31st at Uplink Factory in Shibuya.  Tickets are expected to go on sale on Thursday and can be bought through their website.

The embassy's own Chad Feyen has been working at a frantic pace with his wife to translate the subtitles into Japanese and we do believe they will be ready.

As a bonus, embassy members Byron Kidd of Tokyo By Bike fame, and journalist Yasuyuki Saito, will be participating in a 30-45 minute, post-screening Q & A along with the director Fredrik Gertten.
We are also thinking of organizing a pre-screening ride with the director - probably for the night before.

Obviously, we feel that this is a very important film.  It will certainly be interesting to see how it is received here in Japan - in the "belly of the auto industry beast" - if you will.
So, our task now is to promote the film, create a lot of word-of-mouth, and to hopefully sell-out the theater. If anyone has any ideas, please let us know. If you have contacts in the media, or are on twitter or facebook or any SNS spread the word!
May the bike be with you. Forza!

Just as ripples spread out when a single pebble is dropped into water, the actions of individuals can have far-reaching effects. - Dalai Lama

Yet another Japanese Child killed on the road

11-year-old dies after being hit by dump truck; driver arrested

Japan, at about 50%, has an abnormally high rate of pedestrian and cyclist deaths as a percentage of all fatalities involving motor vehicles - and too large of a percentage of this number are children.

According to the World Health Organization there are about 6500 road fatalities every year in Japan.

For a country with an aging population and falling birthrate you would think everything would be done to preserve and protect life - especially the lives of it`s young people.

This Japan Times article from a couple year`s back explains the situation well.
http://www.japantimes.co.jp/news/2012/05/13/national/media-national/road-death-stats-hide-the-truth/#.VRPp9LkcTIU
If the government`s excuse for not building safer streets is that it's too expensive or that it would inconvenience drivers, then what they are essentially saying is that they do not value life.
Posted by Unknown at 4:40 AM 4 comments

My thoughts on this.

There is a certain percentage of people who will always be selfish idiots whether they are walking, on a bike, or in a car. We can say the number is the same, although I think one could make the case that there is a greater number of selfish idiot car users in the city because only a selfish idiot could not see how unnecessary, polluting, space-wasting, and potentially dangerous it is towards others - or they do and just don`t care. The bicycle user might go through a light because he is an idiot, or maybe because no traffic is coming and he would like to get away from the auto traffic that might kill him. He is no (serious) danger to anyone but himself and his actions are governed by his much greater vulnerability and desire to stay alive. A bicycle is a bicycle - it is not a car nor pedestrian. The authorities try to make cyclists fit into one or the other category but the fact is that cyclists need dedicated protected bicycling space.

Having said that, and getting to the point of posting the article - by using resources and valuable time to give these "warnings" to people on bikes (these are people just randomly stopped here, not people seen breaking a law) -  I believe this is intended to harass, - and to discourage bicycle use.

What they should be doing is saying, "Thank you very much for unselfishly choosing to use your bicycle today despite the dangerous conditions brought about by a lack of adequate infrastructure and any interest in creating safer streets by going after drivers who break traffic rules. Please be careful."

And here is why I care so much about this and why I feel these efforts are so misplaced. These are from the past few months - just Japan and not a complete list. Hundreds of years of life taken away. Motor vehicles are the only common factor in all of these deaths. Not one death caused by a bicycle. This goes on year after year and will continue if we continue to design cities for motor vehicles over places for people.

4-year-old boy dies after being hit by car Link

Visually-impaired woman in coma, guide dog killed after being hit by car Link

13-year-old on bike dies after being hit by truck driven by 83-year-old man Link
Posted by Unknown at 8:19 PM 7 comments

Promote Your Page Too